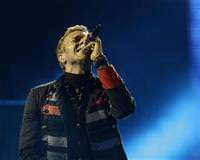 Some of the leading pop stars from the EMI label have donated personal possessions to raise funds for the Japanese Red Cross in its efforts to aid victims of the recent earthquake and tsunami.

Funds raised will go toward the Japanese Red Cross disaster relief efforts, and EMI, one of four major record labels, said it would match all funds from the sale up to a maximum of one million euros ($1.4 million).

The initiative is the latest fundraising effort by the pop world, following the release of an album of hits, "Songs for Japan," featuring acts from all four major labels, and a charity gig in London at the weekend starring Beady Eye and Paul Weller.

The first phase of the auction opens on Tuesday and runs until April 15th and a second phase lasts from April 11-21.

Items included in the first phase of the auction include Coldplay lead singer Chris Martin's jacket from the 2010 Viva La Vida tour, Jane Birkin's own Birkin handbag designed by Hermes and a pair of vintage speakers from Abbey Road's Studio 3.

The second phase includes a 1987 Ferrari 412 which featured in Daft Punk's film "Electroma" and Perry's cupcake trampoline from her California Dreams tour.