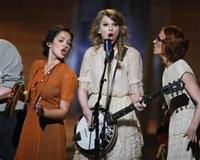 Taylor Swift took the top prize at the Academy of Country Music Awards for the first time on Sunday after being overshadowed at the Las Vegas ceremony by multiple winners Miranda Lambert and Lady Antebellum.

The 21-year-old starlet was named entertainer of the year and was clearly stunned to hear her name called for the final award at the 46th annual event.

Leading nominee Lambert had already won four prizes and seemed poised to add a fifth to her collection. But entertainer of the year is decided by fans on the Internet and the enthusiastic young girls in Team Swift evidently took their voting duties more seriously.

"This is the first time that I've ever won this and I'm just losing my mind," said a tearful Swift, fresh from a tour of Europe and Asia. "The fact that this is from the fans makes it so beautiful ... You are the best thing that has ever happened to me. Ever."

Lambert was named top female vocalist for a second year, once again beating Swift. Her wistful tune "The House That Built Me" was honored for single, song and video of the year.

The award for single goes to the artist and producer, whereas the trophy for best song is given to the artist and composer. Lambert, a 27-year-old Texan, went into the ceremony with a leading seven nominations.

"The House That Built Me," written by Tom Douglas and Allen Shamblin, is a bittersweet remembrance of the memories encased in a childhood home. Lambert won a Grammy for the song in February, and three prizes at the Country Music Association Awards in December.

Lady Antebellum, which led the Grammy winners with five statuettes, picked up two ACM trophies. The trio beat Swift for album of the year and was named top vocal group for a second year.

Lambert was not eligible for the album award, having won it last year for her current release, and the group duly thanked her for not being a contender this time.

Guitarist Brad Paisley was named top male vocalist for the fifth consecutive year. "I am honestly shocked, I really am," he said. "This is way too many of these for me."

The award for top new artist went to The Band Perry, a sibling trio from Mississippi.

The announcement of winners took second place to a string of performances divided between two hotel venues, the MGM Grand and Mandalay Bay. The show was hosted by Reba McEntire for the 13th year. She was joined by first-timer Blake Shelton, Lambert's fiance.