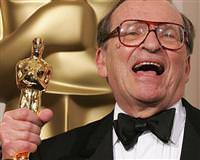 Lumet's death at his Manhattan home was confirmed by Michelle Suess, a spokeswoman for International Creative Management in Los Angeles.

Lumet was one of the leading film directors of the second half of the 20th century. He was prolific, directing more than 40 movies, and was versatile, dabbling in many different film genres. He shot many of his movies in his native New York.

His films, nominated in a variety of categories for more than 50 Oscars, typically were unsentimental and well-crafted, exploring intelligent and complicated themes.

"He leaves a great legacy but more than that, to the people close to him, he will remain the most civilized of humans and the kindest man I have ever known," Oscar-winning actor Al Pacino, who starred in "Serpico" and "Dog Day Afternoon, said in a statement. "This is a great loss."

"He has the energy of a young man and the mind of a young man," Oscar-winner Philip Seymour Hoffman told the Houston Chronicle. Hoffman starred in Lumet's bleak crime melodrama "Before the Devil Knows You're Dead" in 2007 when the director was 83.

Lumet was acclaimed for his technical know-how and his ability to coax strong performances from actors. He drew some of the best career performances out of Hollywood stars such as Henry Fonda, Paul Newman, Pacino and Faye Dunaway. He directed 17 acting performances nominated for Oscars.

'I TRY NOT TO WORK WITH LUNATICS'

"Elia Kazan used to really try to get inside the head and psyche of everybody he worked with," Lumet told The New York Times in 2007, referring to the influential director. "I'm the exact opposite school. I don't like to get involved."

He added, "And I try not to work with lunatics."

Many of his films were masterpieces. In the tense 1964 Cold War drama "Fail-Safe," an electrical malfunction sends U.S. bombers on a nuclear attack on Moscow, prompting the American president, played by Fonda, to sacrifice New York to atomic bombs to avert all-out war with the Soviet Union.

In his film directorial debut, "12 Angry Men," a lone dissenting juror played by Fonda struggles to convince other jurors, including Jack Klugman and Lee J. Cobb, of the innocence of an accused murderer.

In "Network," TV executives exploit the ravings of an anchorman played by Peter Finch, who memorably shrieks, "I'm as mad as hell, and I'm not going to take this anymore!"

In 1973's "Serpico," Pacino plays an honest policeman who takes on the corruption of fellow New York cops. Pacino was back in 1975's "Dog Day Afternoon," about a man robbing a bank to pay for his male lover's sex-change operation.

Even some of Lumet's misfires were memorable. He directed "The Wiz" in 1978, adapting "The Wizard of Oz" with a black cast headed by Michael Jackson and Diana Ross, but the resulting clunky musical was jeered by film critics.

Grammy-winning composer Quincy Jones, who worked with Lumet on five films, including "The Wiz," said in a statement that Lumet's films "made an indelible mark on our popular culture with their stirring commentary on our society."

Lumet was unsentimental about his own films.

"I don't look at my old work. When it's done it's done," he said in a 2007 newspaper interview. "It's very nice when your movie has a kind of resonance, when it stays with a person enough so that they start relating it to other things you've done. But I don't."

Born on June 25, 1924, Lumet served as an Army radar technician in World War Two, then worked as a stage actor in New York before directing acclaimed live TV dramas during the 1950s. He was married four times.