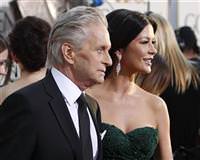 Actress Catherine Zeta-Jones has been treated for bipolar disorder after the stress of husband Michael Douglas's battle with advanced throat cancer, her representative said on Wednesday.

"After dealing with the stress of the past year, Catherine made the decision to check in to a mental health facility for a brief stay to treat her Bipolar II Disorder," the actress's publicist Cece Yorke said in a statement.

"She's feeling great and looking forward to starting work this week on her two upcoming films," the statement said.

People magazine, quoting an unnamed friend of the Oscar-winning star of "Chicago", said she had spent about five days in an unidentified facility. It was not clear when her treatment took place.

Douglas, the star of "Wall Street," underwent chemotherapy for stage 4 throat cancer last year but said in January his tumor has gone. In a turbulent 2010, Douglas's son Cameron from a previous marriage was sentenced to prison on drug charges.

Bipolar disorder is a mental illness marked by sharp mood swings and erratic behavior. Bipolar II is a milder form of the disorder and is marked by less manic "up" moods but more depressive episodes, according to medical experts. It can be treated with medication or therapy.

"There's no question it's been a stressful year," the friend told People magazine.

"Catherine has had to deal with Michael's illness and that's been hard. She went in for a few days because she's about to start working, and wanted to make sure she's in top form, which she is."

Zeta-Jones, 41, was photographed at Buckingham Palace in London in February where she was awarded a Commander of the Order of the British Empire medal by Prince Charles for her services to charity and the film industry.

She has two children with Douglas. According to movie website imdb.com, she is attached to three movies due for release in 2012, including the sports-themed comedy drama "Playing the Field" with Dennis Quaid and Gerard Butler, and comedy "Lay the Favorite" with Bruce Willis and Justin Timberlake.

Her last feature film was the 2009 romantic comedy "The Rebound".