Freak monument to be brought down 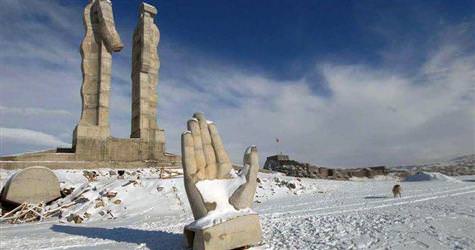 Demolition has begun of the ‘Monument to Humanity’, which Prime Minister Recep Tayyip Erdoğan referred to as ‘freakish.’

Afşin İnşaat, the company to win the tender of the sculpture's demolition has arrived to the memorial's location along with a subcontractor firm. Subcontractor Yaman Karot is already building scaffolding to begin work on the demolition.
The tender for taking apart the sculpture in pieces was won for 272,000 lira. Winners of the tender Afşin İnşaat, have been granted 60 days in order to break apart and remove the memorial which is made of two reinforced concrete blocks 24.5 meters high and situated on Treasury-owned land. Afşin İnşaat, in turn, hired Istanbul subcontractor firm Yaman Karot to conduct the job in Kars.

Employees from the firm arrived to the Sukapı Neighborhood to conduct closer inspections of the monument. Scaffolding was brought to the area by truck and is scheduled to go up today. The subcontracting firm is also setting up safety measures including prohibiting vehicles from entering into the area. Heavy machinery was used to flatten the land where the scaffolding will be set up. Meanwhile, the crane which will be used to tear down the monument has supposedly departed Istanbul for the eastern province of Kars.
The 'Monument to Humanity' was built by sculptor Mehmet Aksoy and has aroused much debate. Just last week, famous Turkish painter Bedri Baykam was stabbed in Istanbul following a meeting regarding the demolition of the controversial sculpture. The monument is claimed to have been erected illegally in a protected site which houses a number of historical ruins.