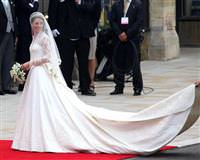 Kate Middleton wore a stunning but simple ivory dress created by Alexander McQueen's Sarah Burton to marry Prince William on Friday, topped off with a tiara on loan from new grandmother-in-law Queen Elizabeth.

Fashionistas across the world had been engulfed in months of fevered speculation over who would get the career-defining job of designing one of the most talked-about outfits of the decade.

The dress featured a long train and hand-made lace applique over an ivory-colored bodice and skirt, made of silk and satin. Inspired by the Middleton's new coat of arms, Kate's earrings included diamond oak leaves and pear-shaped diamond acorns.

"The dress is absolutely magical -- it looks like it's been put together by bluebirds," said Angela Buttolph, editor of fashion magazine Grazia's website.

"It is the perfect Disney princess dress for what has been the ultimate Walt Disney fairytale, from the red-jacketed prince charming to the enchanted forest in the abbey and her looking this radiant maiden."

The identity of the designer and details of the dress were kept a closely guarded secret by St. James's Palace throughout the build-up to Middleton's wedding to Britain's Prince William.

A special marquee was erected outside the entrance to Middleton's London hotel to prevent anyone getting an early glimpse of the dress before she stepped out of her car outside the abbey.

The crowd outside Westminster Abbey were bowled over by the dress -- and the bride.

"It was exactly what I was expecting from her -- simple and beautiful," said pensioner Sarah Jones. "She is a beautiful bride."

Newspapers and websites around the world have run several "scoops" identifying the designer, but none were ever confirmed.

Names put forward in articles and blog postings have included Burton, Bruce Oldfield and Sophie Cranston of the Libelula label.

The fashion world has taken a close interest in 29-year-old Middleton's clothes choices in recent months, with industry insiders predicting that she could have a huge influence on high street sales.

"The fashion industry is now officially besotted with Kate Middleton and everyone in the office is in tears," Grazia's Buttolph said.

Endless comparisons have been made between Middleton and William's late mother Princess Diana, a style icon by the time of her death in 1997 aged 36.

Middleton's dress differed radically from that of Diana at her wedding to Prince Charles in 1981, a frilly, flouncy cream number designed by Elizabeth Emanuel which reflected the times in which it appeared.

Before Friday's wedding, Emanuel told Reuters that Middleton was older and more assured in terms of fashion than the shy 20-year-old Diana, and so was likely to know better what she wanted for the big day.

"With Diana she was very young, when we were introduced to her and fashion was not one of her big interests so she didn't really have her own sense of style," Emanuel said.

"But Kate Middleton does. She's worked in fashion. She knows what suits her."