Hollywood has bin Laden death in its sights 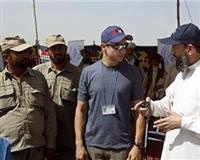 Osama bin Laden's death is blockbuster news for Hollywood, whose attempts to dramatize the wars in Iraq and Afghanistan have largely bombed.

Osama bin Laden's death is blockbuster news for Hollywood, whose attempts to dramatize the wars in Iraq and Afghanistan have largely bombed.

Instead of churning out little-seen films about death and destruction wrought upon civilians and military personnel, the studios can now tap into resurgent American pride with movies about the hunt for the world's most wanted man.

If only John Wayne were still alive or Arnold Schwarzenegger were younger to star in a gung-ho film about the daring strike by dashing Navy SEAL operatives on a compound in suburban Pakistan. Picture "Black Hawk Down" with a happier ending, or "Die Hard" in Islamabad.

Coincidentally, the Oscar-winning director of "The Hurt Locker" -- an Iraq war film that earned just $17 million at the box office -- has a chance to reach a wider audience with an aptly named follow-up, "Kill Bin Laden."

According to entertainment news Web site Deadline.com, Kathryn Bigelow and her "Hurt Locker" screenwriter Mark Boal have been working for some time on their project about an earlier, unsuccessful mission to nab bin Laden.

Details about the film's plot were sketchy, Deadline reported, but the filmmakers will likely need to rework the script to take into account real-life developments. A spokeswoman for Bigelow said she was not talking.

Television will likely rush out a few quick movies if history is any guide. Within six months of the successful Israeli hostage rescue mission in Uganda in 1976, two television movies had been broadcast. The rescue of U.S. soldier Jessica Lynch by Special Operations forces in Iraq also got a similarly quick turnaround time in 2003.

The Navy SEALs -- short for SEa, Air and Land -- were notably depicted in a 1990 action thriller of the same name starring Charlie Sheen.

The film's director, Lewis Teague, told Reuters that a new movie should be similar to "United 93," a semi-factual real-time depiction of events aboard one of the ill-fated 9/11 flights, or to "Touching the Void," which blended documentary footage and recreations to show a mountaineering mishap.

Ideally, the filmmakers should get full cooperation from the Navy SEALs, especially since Teague said they videotape all their operations.

And don't forget a few good jokes, said Teague, a Middle East expert who spent about a year working closely with Navy SEALs in San Diego on his project.

"I would definitely do it with humor," he said. "It takes a very peculiar character to be a Navy SEAL -- courage, stamina, dark humor, a witch's brew of a warrior's mentality."

Can't wait for the film? How about the book? In another strange-but-true coincidence, former Navy SEAL sniper Howard Wasdin is bringing forward the publication of his memoir by two weeks to next week.

"Seal Team Six" is about Wasdin's Navy SEAL training and his service in Somalia during the 1990s. Even though the book has nothing to do with bin Laden, Hollywood studios barraged Wasdin's agent on Monday.

"This story is really on everyone in Hollywood's mind right now so it is probably going to be a race about who can do this type of story," Scott Miller told Reuters.