Balkans play warns against rise of fascism in Europe 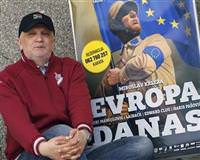 A Balkans theater project has adapted a 1930s essay by a Croatian author which warns against the rise of right-wing politics in Europe and the stark divide between rich and poor.

Based on an essay of the same name by Croatian intellectual Miroslav Krleza from 1935, the play "Evropa Danas" or Europe Today echoes the rise of the Nazis through a thought-provoking collage of slide and light shows and live music combined with individual acting and dance.

"At a time when Bosnia, Croatia and Serbia want to join the European Union, we see that Europe is shaking," said Haris Pasovic, a Bosnian director of the multi-media spectacle in which artists from Slovenia, Serbia and Romania took part.

"The European Union, which in a way has hijacked the concept of Europe by setting up political and cultural criteria of who is European and who is not, is paying the price for its arrogance," he added, referring to the rise of rightist groups in countries including the Netherlands, Sweden and France.

Many of the around 2,500 theater-goers who saw the play in Sarajevo at two performances last week left the theater in a somber mood, having seen a vision of Europe through images of its bloody past and the sounds of war drums.

"What is dramatic is that Krleza's words sound as though they were written this morning and the essay was written in 1935, when Europe was heading toward the darkest days in its history," Pasovic said in an interview.

Krleza -- who was nominated for the Nobel literature prize three times -- enthusiastically embraced the communist ideology of Soviet leader Vladimir Ilich Lenin but became disillusioned with the policies of Lenin's successor Josef Stalin and distanced himself from the party.

"Fascists and racists have entered governments in the Netherlands and Sweden, Le Pen is on the rise in France and extremist rightist ideologies are increasingly present and legitimate in the politics and culture of Europe," Pasovic said.

Marine Le Pen, the new leader of France's far-right National Front, has made a strong showing in the latest opinion polls, which tipped her to qualify for the second round of presidential elections next year.

Dominant on stage was the Slovenian band Laibach, known for its military attire. It performed music from its "Volk" project which involved radical remakes of European national anthems.

Serbian actor Miki Manojlovic, who narrated Krleza's words, is the sole voice of humanity, communicating to the audience the pain and desperation of an intellectual who sees what is coming but cannot stop it.

Against the background of hostile-sounding music and hypnotizing images of European symbols rotating on the screen, Romanian dancer Edward Clug portrays the pain of an individual striving to adapt and find a place in a threatening world.

Artists from different countries -- those already in the European Union such as Slovenia and Romania and those on the "fringes" of the bloc, like Serbia and Bosnia -- want to open a dialogue with Europe, Pasovic said.

"Europe is a much more complex historical, cultural and geographical concept than is envisaged in the reduced approach by the European Union," he told Reuters.

"This play is calling for ... a human dimension and opposing humans being treated as goods. Individual acts have made Europe a civilized place and are key to its development," Pasovic said. "We must not forget it."

Pasovic is perhaps best known for a production of "Waiting for Godot" which he worked on with Susan Sontag after returning to his hometown of Sarajevo during the 1992-95 war.