The semifinals are only hours away… 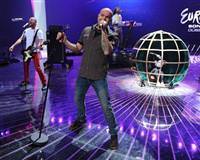 Turkey’s contenders, musical group Yüksek Sadakat takes the stage tonight in Germany to secure a spot in the finals of the Eurovision Song Contest.

Musical representatives from 19 countries compete in this evening's first semifinals. Turkey's Yüksek Sadakat takes the stage in fifth place to perform their song 'Live it up'.
In yesterday's dress rehearsal, Yüksek Sadakat performed wearing their predominantly green costumes for the performance prepared by designer Niyazi Erdoğan.
Our Eurovision representatives Yüksek Sadakat, are performing tonight in Dusseldorf with hopes of making it past the semifinals to secure a spot in the big finals, which will be held on Saturday, May 14th at the 35,000 person capacity Esprit Arena.
The contest will be broadcasted live on TRT and will also be watched widely by Turkey's expats residing in Germany!