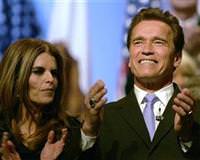 Former California Governor Arnold Schwarzenegger, newly estranged from his wife of 25 years and seeking to resume his Hollywood career, has acknowledged fathering a child more than a decade ago with a member of his household staff.

The revelation came a week after Schwarzenegger, the Austrian-born former bodybuilder turned film star, and his wife, Maria Shriver, a broadcast journalist and member of the Kennedy dynasty, jointly announced their marital split.

"After leaving the governor's office I told my wife about this event, which occurred over a decade ago," Schwarzenegger said in replying to the Times. A Schwarzenegger spokesman later gave a copy of the statement to Reuters.

"I understand and deserve the feelings of anger and disappointment among my friends and family. There are no excuses, and I take full responsibility for the hurt I have caused. I have apologized to Maria, my children and my family. I am truly sorry," Schwarzenegger, 63, said in the statement.

Shriver, 55, in a statement to People magazine released on Tuesday, asked for compassion and privacy.

"This is a painful and heartbreaking time," she said. "As a mother, my concern is for the children. I ask for compassion, respect and privacy as my children and I try to rebuild our lives and heal. I will have no further comment."

As one of the most high-profile but improbable couples in American public life -- a powerful Republican politician and a stalwart Democrat -- the pair endured years of persistent allegations about Schwarzenegger's extramarital dalliances and sexual misconduct.

Shriver was widely credited with saving Schwarzenegger's 2003 gubernatorial campaign by steadfastly standing by him amid media reports that he had a history of groping other women.

Schwarzenegger acknowledged then that he had "misbehaved" and apologized "to the people I've offended," adding, "what was once considered playful behavior on a movie set is now considered something else."

In announcing their marital separation last Monday, Schwarzenegger and Shriver said they "came to this decision together." However, the couple, who met at a charity tennis tournament in 1977 and married in 1986, gave no reason for the split.

Schwarzenegger, limited by state law to two terms as governor, declared his intention to return to show business a month after leaving office.

Shriver, who gave up her NBC News career while acting as California's first lady, recently posted a YouTube video lamenting that she found it "stressful to not know what you're doing next." Her parents both died in the past two years.

Shriver's mother, Eunice Kennedy, was the sister of assassinated U.S. President John F. Kennedy, and her father, Sargent Shriver, was the first director of the Peace Corps and the 1972 Democratic nominee for vice president.

Neither the woman involved with Schwarzenegger nor her child was identified by the Times. When contacted by the newspaper on Monday before the ex-governor issued his statement, the woman said she had retired in January after 20 years of working with the family. She told the newspaper her then-husband was the child's father.

Later Monday, the woman had no comment when the newspaper informed her of Schwarzenegger's statement.

Although a staunch Democrat, Shriver campaigned for her Republican husband when he sought to recall and replace then-Governor Gray Davis, a Democrat, in 2003, and again when Schwarzenegger won re-election in 2006. Many analysts credited her with rescuing his early political career.

Schwarzenegger and Shriver last week said they would continue to parent their four children together and were living separately while they worked on their relationship.

The disclosure caps a spate of U.S. gubernatorial peccadilloes in recent years, including a prostitution scandal that forced Eliot Spitzer from office in New York and the extramarital affair admitted by South Carolina's Mark Sanford.