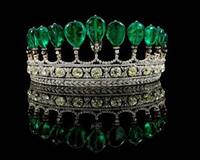 A dazzling tiara featuring emeralds believed to have belonged to Eugenie, wife of French Emperor Napoleon III, sold for a record 11.28 million Swiss francs ($12.76 million) to an anonymous buyer on Tuesday at Sotheby's.

The diamond and emerald tiara, which German prince Guido Henckel von Donnersmarck's commissioned for his second wife Katharina around 1900, was estimated to fetch $5 million-$10 million.

It was top lot at a sale that netted 78.9 million Swiss francs, third highest for a jewelry sale, with 90 percent of 479 lots on offer finding new owners, the auction house said.

"It is needless to say a world record price at auction for a tiara," said David Bennett, chairman of Sotheby's Europe and Middle East jewelry department, as he brought down the hammer to applause.

The tiara also set a record at auction for a piece of emerald jewelry, the auction house said in a statement.

The winning bid was taken over the telephone by Lisa Hubbard, chairwoman of Sotheby's jewelry department in North America -- a hint as to the location of the new owner.

The tiara was among jewels of royal provenance that accounted for 19.6 million Swiss francs of the sale's proceeds, far exceeding expectations, according to Bennett.

"Obviously it was led by the tiara which is probably one of the most spectacular noble jewels we have ever had. The last time it appeared on the market was with us in 1979," he told reporters.

International jewellers Leviev outbid other buyers to purchase an intense pink diamond weighing nearly 11 carats for 9.6 million Swiss francs, the third highest price ever paid for a pink diamond on the block, according to the auction house.

Sotheby's sold a pink diamond last November for 45.44 million Swiss francs ($45.75 million at the time), which remains the most expensive stone ever sold at auction.

"Throughout the sale, estimates were exceeded by very large margins," Bennett said.

"We had sapphires from a private owner in the sale. They fetched extremely strong prices, exceeding estimates. It proves that there is a market for these rare items," he said, noting that the famed Kashmir mines were exhausted by the early 20th century.

Raju Kothari, a Hong Kong-based trader, said he had bought a Kashmir sapphire and diamond flower brooch for $1.6 million -- three times the estimate -- as well as matching ear clips.

"It is very rare to find a set with the same color stones, brooch and earrings," Kothari told Reuters in Geneva. "The market in China is not fully opened up. So there is a big potential especially for Kashmir sapphires to go up (in price)."