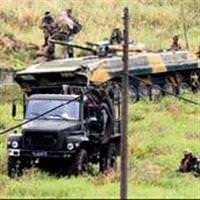 Syrian security forces shot dead at least 30 demonstrators on Friday during protests that broke out across the country in defiance of a military crackdown which has killed hundreds of people, a rights activist said.

Other activists reported demonstrations elsewhere across Syria, a day after the United States told President Bashar al-Assad to reform or step down.

Syria has barred most international media since the protests broke out two months ago, making it impossible to verify independently accounts from activists and officials.

But activists reported protests from Banias and Latakia on the Mediterranean to the oil producing region of Deir al-Zor, Qamishli in the Kurdish east and the Hauran Plain in the south.

"No dialogue with tanks," said banners carried by Kurdish protesters who shouted "azadi," the Kurdish word for freedom, rejecting promises by the authorities for a national dialogue, a witness said.

Another 11 were killed in the central city of Homs, while seven died in Deraa, Latakia, the Damascus suburbs and Hama, she added. Assad's late father, president Hafez al-Assad, sent the military to Hama in the 1980s to crush an Islamist uprising.

The Syrian Observatory for Human Rights, which is based in Britain, said at least 831 civilians had been killed since the uprising against autocratic rule erupted in the southern city of Deraa nine weeks ago. It said at least 10,000 people had been arrested, including hundreds across Syria on Friday.

Syrian authorities blame most of the violence on armed groups, backed by Islamists and outside powers, who they say have killed more than 120 soldiers and police. They have recently suggested they believe the protests have peaked.

Security forces arrested 12 members of the Assyrian Democratic Party, from Syria's Christian minority, in a raid on their headquarters in Qamishli on Friday, human rights campaigners said.

Protests erupted in Damascus suburbs and its Barzeh district, where two witnesses said security forces fired at demonstrators and chased them in the streets. Plain clothes police conducted house to house arrests in Barzeh at night, a resident said.

Security forces also fired live ammunition at a night demonstration in the besieged hill town of Zabadai west of Damascus, a rights campaigner in the area said, adding that there were no immediate reports of casualties.

In nearby Madaya, tanks deployed at the southern entrance of the town, which had witnessed growing pro-democracy demonstrations, the activist said.

Some protesters called on Friday for freedom, activists said. Others demanded "the overthrow of the regime," the slogan of uprisings which toppled leaders in Egypt and Tunisia.

Amateur video uploaded by activists, who said it was recorded in Homs, showed scores of marchers scattering as gunfire broke out. A police car was left burning in the street.

The Syrian Observatory for Human Rights said it had names of at least 27 protesters killed on Friday.

LEAD OR "GET OUT OF THE WAY"

The United States, which has condemned the crackdown as barbaric, imposed targeted sanctions against Assad this week. President Barack Obama said on Thursday that he should "lead that transition or get out of the way."

Despite strong words from the White House, the West has so far taken only small steps to isolate Assad when compared with its bombing campaign against Libya's leader Muammar Gaddafi, also accused of killing protesters.

The two-month uprising has posed the gravest challenge to Assad's rule. In response, he has lifted a 48-year state of emergency and granted citizenship to stateless Kurds, but also sent tanks to several cities to suppress the protests.

The main weekly Muslim prayers on Fridays are a rallying point for protesters because they offer the only opportunity for large gatherings, and have seen the worst death tolls in unrest.

Activists reported shooting in Banias and the Damascus suburb of Saqba on Friday. Both were subjected to security sweeps earlier this month aimed at crushing dissent.

Western powers, fearing instability across the Middle East if Syria undergoes an upheaval, made only muted criticisms of Assad's actions at first, but then stepped up their condemnation and imposed sanctions on leading Syrian figures.

"The sanctions have not and will not affect Syria's independent will," an official source was quoted as saying on state television on Thursday.