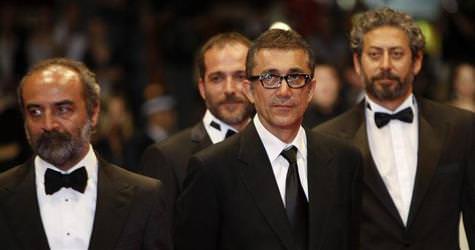 Nuri Bilge Ceylan's film Once Upon a Time in Anatolia was the recipient of the Grand Jury Prize in the 64thCannes Film Festival yesterday.

The Cannes Film Festival has honored Nuri Bilge Ceylan once again. The director first won the Grand Prix in 2003 for his film Distant and last night; he was honored with the same prize for his new film Once Upon a Time in Anatolia. This year however, the jury, led by Robert de Niro, chose to present the Grand Prix to two films. Once Upon a Time in Anatolia shared the honor with Jean-Pierre Dardenne and Luc Dardenne's The Kid with a Bike. This year's Golden Palm winner was Terrence Malick for his film The Tree of Life. Ceylan stated, "Thank you for selecting my long and difficult movie one more time," during his acceptance speech, where he also expressed his surprise at receiving an award while also pointing out that the film's premiere was held on the final day of the festival. "Screening it on the last day, I thought it would be too tiring for the jury. We thought that the jury members, press members and audiences would be tired and our film is one that is hard to watch. I want to thank my crew and cast very much."
Ceylan took time out to discuss his award winning film with SABAH.

- How was it filming in your own style with well-known actors such as Yılmaz Erdoğan?
- To be honest, almost all of the actors had already thought about this and had prepared themselves somewhat before they arrived on set. Then again, I can't say it's easy to share a common ground with a number of actors that all have very different styles and habits. However, in the end I can say that I am extremely pleased with their extraordinary effort and performances.
- Were these specific actors in your mind from the start?
- No. While writing the screenplay, the only actor I had in mind was Fırat Tanış for the role of the suspect Kenan. The remaining actors were selected through a drawn out casting process, and with audition tapes.
- The name Once Upon A Time in Anatolia is reminiscent of a fairy tale…
-Let's consider it a small greeting to Sergio Leone, who I like a lot. He has taught me a lot on the art of film. After his films a number of other films which were unrelated such as Once Upon a Time in China, and Once Upon a Time in Mexico were filmed. We figured that because the words "Once Upon a Time in Anatolia" is a line in the script, while also being a 'tradition' started by a director I admire, it would not be so bad to use it as a title for a film representing our own land and style.
There is a sense of timelessness in the film, isn't that so?
- Yes. It does not take place in the past. However, it could be said that it sort of takes place in the past of the future, so to speak. This sense of timelessness you mention may be because of this.
- The beginning of the film surprised us.
- It was important for us to start this scene off with the Kenan character seen drinking rakı, sitting in a car, distanced from conversation and in a quiet and dark manner.
- You place importance on displaying the human condition in back stabbing situations.
- Back stabbing situations can enrich the scene because it has the potential to reveal certain qualities of the human soul. However ordinary situations in humanity are also important for me.
- Do the characters fall onto a path of revenge between one another?
- In the first section of the film, we wanted to create a journey which transpires in a slightly suffocating atmosphere, which transpires in the endless darkness of the desert and appears as if it will never end, while encompassing the audience in this emotion. That's why, when in comparison to the film viewing habits of our day, we decided to keep this section to a length that would be testing for the audience.
- There are no women in this dark world of men. And then all of a sudden they appear, like a 'mirage'. Why?
- During the scriptwriting phase, I consulted with a number of bureaucrats such as police captains, prosecutors and judges. One day one of the police chiefs said something like this: "Sometimes you can beat a suspect for three days to confess and they won't say a word. But then later, he would maybe for example see a woman or hear a child cry and then would break down and confess to the crime." Life is full of surprising miniscule details that can take on big roles. The surfacing of an innocent little girl after a dark, suffocating and dusty journey can result in surprising transitions in the soul.
- The doctor's expression when the child hit the ball was pessimistic.
- I can't say it was pessimistic; however there is also a slightly tragic dimension to the continuation of life despite everything.