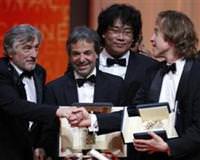 Only his fifth feature, the two-hour 20-minute contemplation on the origins of life and where we go when we die was among the favourites to walk off with the coveted award, one of the most prized in the movie calendar after the Oscars.

The semi-recluse did not personally accept his prize, which rewards a movie that has been in the making since 2005.

"He is personally a very humble guy, a very shy guy," said Bill Pohlad, a producer on the movie, when asked to explain the film maker's absence. No cast members were in attendance either.

"He very sincerely wants the work to speak for itself and keep back in his private life and not have it be about the ego and the celebrity."

There was an award for "Melancholia" directed by Denmark's Lars Von Trier, which remained in competition despite his shock expulsion from the festival for jokingly calling himself a Nazi and Hitler sympathiser during a press conference. U.S. actress Kirsten Dunst won the best actress category for her role in his powerful portrayal of a cosmic collision that ends all life, which critics said was a downbeat companion piece to Malick's more optimistic vision.

"Wow, what a week it's been for me!" said Dunst, likely to prove a popular winner for her portrayal of depressed Justine.

"This is an honor which is a once-in-a-lifetime thing for an actress and thank you to Cannes film festival for allowing our film to still be in competition.

"And I want to thank Lars for giving me the opportunity to be so brave in this film and so free."

Von Trier, who won the Palme d'Or in 2000, was not allowed within 100 metres of the main festival building where the glitzy awards ceremony took place.

The race for the big prizes was seen as wide open this year, considered a strong one for the world's biggest cinema showcase. Some eight movies were named as possible Palme d'Or winners, and Malick's movie sharply divided critics.

"It was a difficult decision for us on all fronts," said jury president Robert De Niro after the awards were announced.

The runner-up Grand Prix went to two movies -- the slow-moving, lovingly crafted "Once Upon a Time in Anatolia" by Turkey's Nuri Bilge Ceylan and the moving child drama "The Kid With a Bike" by Belgian brothers Jean-Pierre and Luc Dardenne.

The duo narrowly missed out on an unprecedented third Golden Palm at the festival.

Best actor went to Jean Dujardin for "The Artist," a popular re-make of a silent, black-and-white romance that transported audiences back to the "pre-talkie" era in Hollywood.

The ceremony brought the curtain down on a festival that will long be remembered for the unprecedented ban on Von Trier.

Many movie goers disagreed with the decision, which could damage his reputation and ability to make movies in the future.

In addition to the films, the A-listers came out in force, with Angelina Jolie, Pitt, Johnny Depp, Penelope Cruz, Penn, De Niro and Ryan Gosling all gracing the grand red carpet that leads to the main festival cinema.

Lady Gaga, Kanye West, Jamie Foxx, Janet Jackson and Gwen Stefani were among the big names hitting the party circuit or performing in Cannes to add to the feel-good buzz.