A ‘Best Actress’ in Istanbul 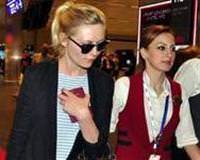 Selected for the Best Actress award at the 64th Cannes Film Festival for her role in 'Meloncholia'', Kirsten Dunst has now made Turkey her next stop in order to participate in the Istancool Festival. The American actress and model Dunst arrived on Turkish Airlines' commercial flight from Nice to Istanbul and refrained from answering any questions from journalists as she passed through the Atatürk Airport's International Terminal.
Known best for her starring role in the Spider Man film series, Kirsten Dunst will be a guest on a panel with one of Turkey's young promising actresses Nurgül Yeşilçay for the Istancool International Culture Festival.