Amy Winehouse out of rehab and "raring to go" 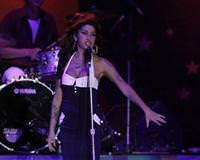 British singer Amy Winehouse has ended her latest stint in rehab in London and will continue treatment as an outpatient, her spokeswoman said on Thursday.

Winehouse, 27, checked herself into a clinic last week in order to get herself ready for a series of summer festival appearances in Europe starting in mid-June.

"She has completed her assessment at the Priory Clinic in London and will continue as an outpatient," the singer's publicist Tracey Miller said in a statement.

"She is now looking forward to playing shows around Europe this summer and is raring to go. She would like to send a huge thanks to all her fans for the messages of support she has received over the last week and can't wait to see them," Miller added.

Winehouse, ironically best known for her 2006 hit "Rehab," has had an ongoing battle with drug and alcohol addiction.

According to Winehouse's website she is due to perform at music festivals in Serbia, Turkey, Greece, Spain and other European nations this summer.