Andy Warhol and his camera come to Istanbul 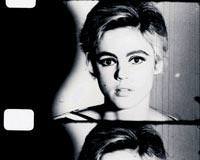 One of the most influential figures of the 20th century modern art world, Andy Warhol, will be the guest artist in all three of the Galerist venues. A very special selection of Warhol’s films, videos and photographs will be going on display in Turkey for the first time ever.

Known for his creations that depicted the consumer culture and made their mark on 20th century art, a series of films, videos and photographs, taken by Warhol between the years 1963 and 1972 will be simultaneously on display in Istanbul Galerist's Tepebaşı, Galatasaray and Akaretler locations.
Works by Warhol were last on display in Istanbul in 2001 at the Yapı Kredi Kazım Taşkent Art Gallery; however this selection will be coming to Turkey for the first time ever.
Opening tomorrow, 'Warhol in Motion' will be on display until July 9th. The exhibition consists of works done in his Factory workshop which he founded in 1962. The pieces include imagery of Edie Sedgwick, Dennis Hopper, Mick Jagger, Joan Collins and Liza Minnelli including a number of other famous figures.