When school’s out it’s time for art 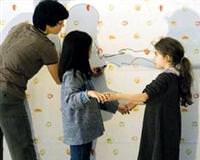 With schools finishing the year this Friday, a number of art events are awaiting young participants. Both the Pera Museum and Istanbul Modern will be hosting visual arts workshops that kids can attend during the summer break.

Schools break for the summer this Friday. Two of Istanbul's significant art establishments, Istanbul Modern and Pera Museum have arranged a variety of events to teach the meaning of art and provide opportunities for commentary and sharing as well as to allow children to experience art first-hand.
From July 4th to August 26th, children between the ages of 7-12 will be able to participate in a series of workshops offered by Istanbul Modern entitled, 'My Museum' (Benim Müzem), 'Universe of Imagination' (Hayal Evreni), 'My Theater Bag' (Tiyatro Çantam), 'A Story on Canvas' (Tuvaldeki Hikaye).
The 'My Museum' course will provide the opportunity for children to create a variety of works from painting to sculpture, installment art and photography and to then create their own museums. The 'Universe of Imagination' is an event that will allow children to learn the stages of the world and then use their own imagination to create their own earth. In the 'My Theater Bag ' workshop, children will create their own theatrical productions which they will then act out. 'A Story on Canvas' will provide students the chance to visit the Istanbul Modern's permanent exhibition 'New Compositions, New Horizons' and then to write their own scenarios based on a composition they have selected from the exhibit they will then stage with their own decorated sets and costumes which will then be filmed. The price to attend a workshop in the Istanbul Modern's Youth Workshop Modern series is 180 TL.
The Pera Museum will also be hosting three workshops for children between the ages of 7 – 12. From June 12th to July 16th, Pera Museum will be offering a caricature workshop, as well as painting and sculpture classes.
An exhibit of work from a photography workshop for children residing in Tophane is on exhibit at Depo until June 18th. The workshop held for 20 children between the ages of 10-16 began in March 2011. The workshop taught a variety of art applications, collage as well as basic photography in group projects. The exhibit will display the photography, collage and compositions created by the children in the workshop.
An exhibit of children's work from the Photo World Photography Center's photography school will open on June 18th. The exhibit consists of 20 photos taken from the perspective of 12 to 16 year old students and includes imagery of Istanbul, nature and people. The exhibit will be on display at the center located on Kadıköy's Bahariye Caddesi for 15 days.
Turkey's Science Center Foundation (Türkiye Bilim Merkezleri Vakfı) will also be offering painting, caricature and archeology classes at their Science School. For more information visit: www.bilimmerkezi. org.tr.