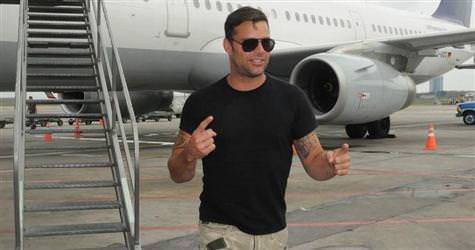 World renowned singer Ricky Martin has arrived to Istanbul’s Atatürk Airport to perform for his fans in Turkey. Martin plays the first concert of the European leg of his world tour in Istanbul Saturday night and then moves on to Bursa.

Martin, who flew Lufthansa Airlines, landed today at 13:40. Posing for journalists upon his arrival, with special permission granted, instead of exiting from the international arrivals hall, Martin left form the private aviation terminal.
While in Istanbul Ricky Martin has rented out the House Hotel Bosphorus in Ortaköy and upon his arrival, the star's first request was for a massage.
With a career spanning back to 1991, the Puerto Rico pop star has sold 70 million albums throughout the world. Ricky Martin plays the Kuruçeşme Arena on Saturday, June 18th and on June 20th, he plays the Bursa festival. Martin last came to Turkey in 1998.