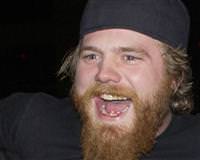 Ryan Dunn, a co-star of the "Jackass" movie franchise, died on Monday when a sports car he was driving careened off a highway in Philadelphia, Pennsylvania and burst into flames, police said.

Dunn was driving his 2007 Porsche, which police found "fully engulfed in flames" in a wooded area in outer Philadelphia, police in the West Goshen Township said Monday.

An unidentified passenger also died in the crash that occurred early Monday morning.

The daredevil personality, 34, part of the crew in the top-grossing "Jackass" movie franchise that specialized in risky pranks and gross-out stunts, lived in nearby West Chester, Pennsylvania, police said.

A police statement said a "preliminary investigation revealed that speed may have been a contributing factor to the accident."

In 2005, Dunn was charged with driving under the influence of alcohol and entered a first offender's program that allowed him to clear his record after a certain period of good behavior, said Patrick Carmody, Assistant District Attorney in Chester County.

Besides the Jackass movie franchise that has grossed more than $330 million worldwide, according to tracking website Box Office Mojo, Dunn also starred in "Haggard: The Movie," an indie comedy in which the tattooed, bearded, daredevil played himself.