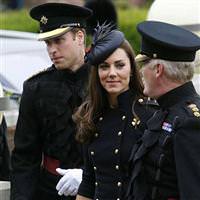 Ancestry.com said that the new Duchess of Cambridge and the author of "Pride and Prejudice" are 11th cousins, six times removed due to their 15th century common ancestor Henry Percy, who was the 2nd Earl of Northumberland.

The family history research group said the connection was fitting given Austen's many female characters who fall in love with, or aspire to marry, men of higher rank.

Middleton, 29, a commoner with no aristocratic background, married Prince William -- second in line to the British throne -- in April after a nine-year romance. She is now formally known as Catherine, Duchess of Cambridge.

"Finding this connection between the Duchess of Cambridge and Jane Austen is very exciting since, in many ways, Catherine is the modern Jane Austen heroine: a middle class girl marrying the future King of England," said Anastasia Harman, lead family historian for Ancestry.com.

"Jane Austen may have written about happily-ever-after but it seems Catherine has found a nonfiction hero to spend her life with -- far past the epilogue," Harman added.

Born in England in 1775, Jane Austen is one of the best-known novelists and social satirists in the world with works like "Sense and Sensibility", "Emma" and "Persuasion." She never married.