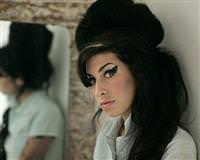 In the Twitter age, “famous last words” aren’t what they used to be. Amy Winehouse’s final message to her public, tweeted two nights before her death, was … “oinka oinka oinka why you awake.”

Not quite the tragic harbinger of impending doom that might have served to romanticize the 27-year-old singer's demise.

Any time a celebrity succumbs to a drug-related death -- which is the leap to judgment made by virtually the entire world, in this instance -- it's tempting to want to construct a narrative of sadness and depression leading up to the star finally no longer being able or willing to hold onto this mortal coil.

But in Winehouse's case, she didn't seem to have hit bottom at all, though there'd been troubling and embarrassing incidents in recent months. The very worst seemed to be in her past.

The scariest thing, then, may be that it's possible to damage a body so much through years of abuse that even a minor or momentary relapse can be fatal. And that kind of protracted end is far too anticlimactic for satisfying art or life.

The year 2011 had started promisingly for Amy Winehouse, or at least less ominously than any other recent year.

Over a period of days in the first week of January, she was photographed walking the grounds of a resort in Brazil looking happy and relatively healthy, despite a couple of huge, conspicuous bruises on her legs.

She was visited by the Stones' Ronnie Wood, which might sound like a recipe for trouble, except that he had entered a rare phase of sobriety, and neither appeared to be drinking.

Winehouse even looked like she'd been eating. There was the admitted boob job, to be sure, fleshing out her bikinied appearance, but that part of her body no longer stood out quite so radically from the formerly emaciated rest of her.

Moreover, she did a short South American mini-tour -- her first since 2008, and what would turn out to be her last -- which wasn't even a disaster.

Though the British press was always looking for her weak spots, even they seemed to be rooting for a comeback. A Daily Mail headline declared that she was "back and in fine form" on her opening night in Brazil.

Even under the best of circumstances, Winehouse tended to be an anxious, distracted performer in concert, and the Mail noted "small hiccups" in her first comeback set. But the Sun reported that she would make 5 million pounds for the brief tour, which provided another reason to keep it together, public perception aside.

Since those dates went so comparatively well, a more extensive European tour was booked for her in the summer. But her life and sobriety took another bad turn between January and May.

Those outside Winehouse's inner circle can only guess at what sent her back into a tailspin, but some reports cited a supposed breakup with her boyfriend of about a year, film director Reg Traviss.

He was said to gotten fed up over her drinking, which had supposedly become more pronounced as she grew lonely while he was busy making and promoting a film in the early months of the year. But other accounts had her drinking because of him leaving. It's a chicken-or-the-egg conundrum that any Al-Anon member knows too well.

On May 27, she checked into the Priory Clinic in London, after reportedly downing a small bottle of her favorite beverage, vodka, on her way there. A public statement issued by her reps more or less described the visit as preventive rehab.

"She wants to be ready for performances in Europe this summer and decided to seek an assessment. She will remain at the Priory on doctors' advice," it read.

And if Traviss had, in fact, broken up with her, this beau was not far out of her life, as he was reported to be at her bedside at the Priory alongside her father, Mitch, when doctors told her to stop drinking or die.

But she didn't say yes, yes, yes to rehab for long: She checked back out less than a week later, with an official proclamation that she'd be getting "outpatient treatment."

On June 18, on the opening -- and closing -- night of her tour, it quickly became evident just how farcical the idea of Amy Winehouse benefitting from outpatient treatment was. In fact, it was apparent to the entire world: In 2011, kicking off a tour as far as Belgrade, Serbia is no shield against instant global dissemination of a drunken shambles.

Winehouse slurred, sat down, lost her balance, lost a slipper, threw her microphone down, and frequently left the stage or otherwise left songs to her background singers to finish. The boos were heard on millions of laptops.

It seemed like another small step in her ongoing career suicide. But did she jump or was she pushed? A member of a warm-up act claimed she'd been forced to go on stage in Belgrade.

"Four British bodyguards simply pushed her to step up on stage," musician Ana Zeo Kida told the Sun. "She did not want to and was making a scene trying to escape them. It was distressing to see; she obviously needed help."

A Winehouse rep refuted the claim and insisted she'd gone on stage voluntarily.

She never made the second date in Istanbul, as the rest of the 12-date tour was canceled on June 20.

"Everyone involved wishes to do everything they can to help her return to her best," a statement from her reps said. "And she will be given as long as it takes for this to happen."

The problem seemed to be drink more than drugs. Winehouse had claimed to Glamour last October that she'd been drug-free for "almost three years." And if that was tough to believe, at least her days of openly smoking crack cocaine seemed to be well in the past -- as when she truly seemed to bottom out in 2007-08.

But by now, Winehouse's battered and abused body may no longer have been able to handle even "minor" drugs, like the ecstasy she was alleged to be fond of, or her return to extreme pubbing. She'd been diagnosed with early-stage emphysema years ago, which failed to put a crimp in her seemingly nonstop cigarette smoking.

Worse, she'd become prone to constant seizures. Her ex-husband, Blake Fielder-Civil, had claimed that she'd once stopped breathing and died in his arms before he took drastic steps to revive her.

A source told the Sun that Winehouse's most recent seizure had been just two weeks ago, when she was found collapsed on a London street and taken to a private clinic. "She had been admitted to hospital by ambulance on a regular basis suffering seizures. Her nervous system was shot to pieces," the source was quoted as saying.

But she seemed to have it together enough when she made her last public appearance with her 15-year-old protege, Dionne Bromfield, two nights before her death.

Winehouse resisted the offer to join in on background vocals while she danced around the stage, but that may have had more to do with wanting to keep the spotlight on her young charge than any kind of incapacitation.

No drug paraphernalia was found at Winehouse's house, according to news reports, and some friends have been quoted as speculating that she may have died from nothing more severe than the combination of alcohol and an ecstasy pill.

A doctor had checked her out the night before her death, and had been on the phone as late as 10 a.m. Saturday morning. But when a bodyguard discovered her lifeless, and medics were called around 4 p.m., she'd reportedly been dead long enough that rigor mortis to set in.

If we wanted to script the story of Winehouse's life, who or what would we blame for her final deadly tailspin?

Was it the shame over her humiliation in Serbia that was her fragile ego's last straw? Maybe, but Winehouse had endured a lot of public shaming over a period of five years without seeming to let it ruffle her bad-girl self-image.

If this was a factor, though, did her handlers send her off toward her death by forcing her to tour at all? There will be that conjecture. On June 19, her father tweeted: "Amy was advised by me and her manager not to do gigs. These were contracted months ago when she was well."

In previous years, though, Mitch Winehouse had said -- contrary to conventional wisdom about sending addicts on tour -- that being out on the road was actually safer for Winehouse, as she was less likely to get into trouble working on the road than she was at home, left alone to her own devices, dealers, and loneliness.

Was it depression over her allegedly on-and-off relationship with Traviss -- from all accounts, he was a positive force in her life -- that set her back on a bad course?

Anyone who ever heard "Back to Black" knows this was a woman who courted and even thrived on the darkest sides of romantic obsession. And splits did not come easy to her, as anyone who tracked her relationship with her widely reviled ex-husband knows.

As recently as March 2010, the year after their divorce, Winehouse was tweeting, "I love my husband Blake an it aint wrong! Marry for life." That's why it came as a relative sigh of relief when it was revealed Tuesday that Winehouse had removed Fielder-Civil (left) from her will before her death, instead leaving her estate to her immediate family.

But Traviss, who was held in close regard by her parents, seemed like too stabliziing a force to inspire any "Back to Black"-style depressive laments. He was around in her final months and not the wholly abandoning type, whether or not there were hiccups in their romance.

In the end, the script structure leading up to Winehouse's death may most resemble a bad "Final Destination" sequel. It seems possible that all those years of smoking crack cocaine and doing other hard drugs, which many observers thought would surely kill her at the time, took a slower-motion course toward her destruction, finally claiming her worn-down nervous system when she thought she could get away with the soft stuff.

It's hard not to hear the haunting refrain of one of her finest songs: "I cheated myself, like I knew I would …"

She cheated us, too, to a far lesser extent, however thankful we are for the times and music we had together.