Who has the most expensive music video? 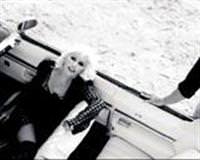 The fierce competition raging between music artists continues with both album sales and music videos. The following is a list of who is on top in the latter category!