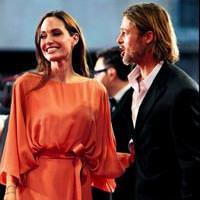 Hollywood actress Angelina Jolie was close to tears as she received a special award during an unannounced visit to Sarajevo's film festival Saturday with partner Brad Pitt.

"I will start crying if you don't stop," Oscar-awarded Jolie told the audience who gave her a standing ovation at the city's National Theater.

Jolie chose Bosnia's 1992-95 war as the setting for her first film as a director. "In the Land of Blood and Honey" is due to be released in December.

She has also visited Bosnia as a goodwill ambassador for the U.N.'s refugee agency UNHCR and funded the construction of several houses for returnees in eastern Bosnia.

Festival director Mirsad Purivatra presented Jolie with a heart-shaped award when she appeared at the closing ceremony.

"Tonight we are giving the honorary Heart of Sarajevo to a great artist, not only for the great impact she has in the world of cinema but also for persisting and her active engagement in the complexities of the real world we live in," Purivatra said.

Jolie, dressed in a long peach dress, stood on stage with eyes full of tears waiting for the clapping to die down.

"I told Brad in the car I was afraid I was going to cry," she said, her voice breaking.

Jolie's film tells the story of a love affair between a Bosniak (Bosnian Muslim) woman and a Serb, who were on opposite warring sides during the conflict.

She planned to shoot parts of the film in Sarajevo and engaged a local crew. But she had to move to Budapest after some female victims of sexual violence objected to details in the plot and Bosnian authorities canceled a filming permit.

"I am so honored to be here at this festival," Jolie said after receiving the award. "There is no greater example of the strengths of the artists and the festival that began during the war and grew stronger every year."

The Sarajevo film festival was launched toward the end of the Bosnian capital's 43-month siege by Bosnian Serb forces.

Jolie presented Austrian actor Thomas Schubert with the award for the best actor for his role in the film "Atmen," directed by Karl Markovics.

Atmen, about a young offender searching for his mother, was also named best film in the festival.

Romanian actress Ada Condeascu won the prize for best actress for her role in the film "Loverboy."