Possessions of kung fu legend Bruce Lee to be auctioned 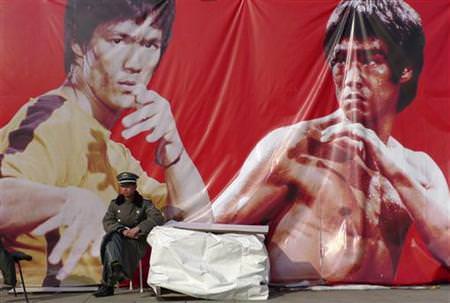 Thirteen items belonging to the late kung fu legend Bruce Lee, including a hand-written letter and a fur-lined coat, are set to go under the hammer in Hong Kong at the weekend.

Among the items to be sold in what is thought to be the largest auction of Lee memorabilia in Hong Kong to date is the fur-lined costume jacket, which was made for Lee's film "Game of Death" and worn by him in 1973, just before he died of a reaction to medication.

Other items include a letter written in 1966 to Taky Kimura, a friend in Seattle and fellow kung fu instructor who was best man at Lee's 1964 wedding.

"Actually I think the most important, the best item, is the three-page hand written letter by Bruce Lee," said Anna Lee, spokesperson for Phila China Auctions, which with U.S.-based Kelleher Auctions is conducting the sale.

"It talked about his early days in Hollywood and how he taught megastars to do kung fu and all that. It's a letter written to his confidante in Seattle, his student, and his long-time friend."

Other lots include signed student membership cards to Lee's kung fu schools, and a martial arts book inscribed by the actor.

Lee is credited with bringing martial arts into the mainstream and has long been one of Hong Kong's proudest exports. Even so, plans to turn his old home in Hong Kong into a museum fell through this year.

"Aside from little items here and there on Ebay, there hasn't been a major auction of his material. The last one we can recall is 1993 when the widow, Mrs. Linda Lee, sold like over 200 items in Los Angeles through an auction house," Lee said.