Will Smith, Jada Pinkett, all smiles in public 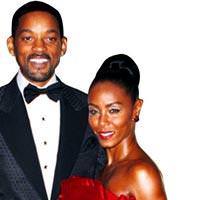 One day after a magazine claimed that their marriage was in trouble, Hollywood super couple Will Smith and Jada Pinkett Smith appeared together in public Wednesday, smiling broadly for cameras and fans.

Their brief walk down a sidewalk outside a restaurant in the wealthy enclave of Malibu followed a story published online Tuesday by In Touch Weekly magazine saying the pair, who have two superstar children, were headed for a separation.

That story was attributed to an unnamed "insider" and was followed by a public denial in a statement issued on behalf of the Smiths.

"Although we are reluctant to respond to these types of press reports, the rumors circulating about our relationship are completely false. We are still together, and our marriage is intact," the pair said in the joint statement.

But the rumors persisted Wednesday with singer Marc Anthony, who co-stars with Jada Pinkett Smith on TV show "Hawthorne" and who recently split up with singer Jennifer Lopez, surfacing in reports as a possible suitor to his TV co-star.

In Malibu, Will Smith was asked by a reporter for celebrity news website TMZ.com to comment on the "ridiculous rumors" in the media, and Smith answered, "you just did."