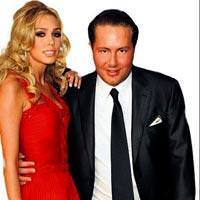 Two globe-trotting celebrities, Sofia Coppola and Petra Ecclestone, held weddings in Italy over the weekend, one low-key and the other over-the-top, according to media reports on Sunday.

Academy Award-winning filmmaker Coppola and her longtime musician boyfriend, Phoenix frontman Thomas Mars, were married on Saturday in the Italian village that was home to Coppola's grandparents.

On the same day, British heiress Ecclestone tied the knot with businessman James Stunt outside Rome, capping a three-day event with a reported price tag that ranged widely from $2 million to $8 million, according to various reports.

The Ecclestone-Stunt wedding took place at the same castle where Tom Cruise and Katie Holmes married, and featured fireworks as well as performances by Eric Clapton and the Black Eyed Peas, according to People magazine.

Ecclestone, a 22-year-old fashion designer, is the daughter of former Armani model Slavica and Formula One racing chief executive Bernie Ecclestone. She's no stranger to lavish spending: In July, she paid $85 million for the Los Angeles mansion that was once the home of Aaron and Candy Spelling.

By contrast, Coppola and Mars were wed in a civil ceremony before 80 guests at the Coppola family's villa in the southern Italian town of Bernalda.

Wearing a custom lavender gown by Azzedine Alaia, the 40-year-old bride walked down the aisle on the arm of her father, "Godfather" director Francis Ford Coppola, who owns the estate, according to reports.

Coppola won the screenwriting Oscar for her movie "Lost in Translation," and became the first American woman to be nominated for an Academy Award for directing.

Her first marriage, to director Spike Jonze, ended in divorce in 2003 after four years.