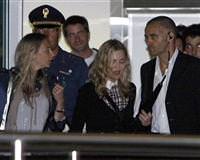 The Venice film festival promises a pop superstar and a whiff of scandal Thursday, with Madonna presenting her second feature and Roman Polanski notable by his absence at the world premiere of his new picture.

Madonna, 53, is in the canal city for "W.E.," a film loosely based on the relationship between American divorcee Wallis Simpson and Britain's King Edward VIII, which eventually led him to abdicate the throne in 1936.

Starring Abbie Cornish and James Fox, it is the singer's second outing behind the camera after the 2008 comedy drama "Filth and Wisdom," which was generally poorly received by critics.

W.E. appears outside the main competition lineup of 22 films confirmed so far for Venice, but is set to dominate the second day of the 2011 festival on the Lido waterfront nonetheless.

George Clooney opened the 11-day cinema showcase with his political drama "The Ides of March," which was generally well received by critics Wednesday and seen as a solid launch of this year's star-studded event.

Competing for the attention of the thousands of journalists and fans who line the red carpet each evening for a glimpse of their idols will be Polanski's "Carnage" starring Oscar winners Kate Winslet, Christoph Waltz and Jodie Foster.

The Franco-Polish director worked on the script of the in-competition Carnage, an adaptation of Yasmina Reza's comedy play "God of Carnage," while under house arrest in Switzerland in 2010.

The 78-year-old behind the classic "Chinatown" was freed after Swiss authorities decided not to extradite him to the United States, where he was wanted for sentencing for having sex with a 13-year-old girl in 1977 in Los Angeles.

Unsurprisingly, Polanski will not leave France for Italy to attend the world premiere, although some members of his cast, including Winslet, are expected.

"I think he can only travel, if he leaves France ... to Switzerland and Poland, so of course ... it is sad that he is not here but three out of his four lead cast will be here and that will create a sensation because it's really a sensational film," Venice director Marco Mueller told Reuters.

The movie centers around two couples whose children are involved in a playground brawl.

According to production notes, it promises to "shine a spotlight on the risible contradictions and grotesque prejudices of four well-heeled American parents."

Also premiering Thursday is "Warriors of the Rainbow: Seediq Bale," based on the true story of an uprising by indigenous people in Taiwan against Japanese rulers in the 1930s.