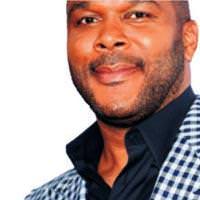 Actor Tyler Perry, who has his own film and TV studio in Atlanta, ranks atop the list of Hollywood's highest paid men, in a new ranking from Forbes.com that includes director Steven Spielberg and singer Elton John.

Perry topped the list by making $130 million from May 2010 to May 2011, financial website Forbes.com reported on Monday.

The actor, writer, director and producer had his Hollywood breakthrough with 2005 film "Diary of a Mad Black Woman," which he created as a stage play. He dressed in drag to portray tough-talking family matriarch Madea, a crowd-pleasing role.

That movie led to a number of sequels, and most recently Perry has seen success producing the television show "Tyler Perry's House of Payne," which runs on TBS.

Holding the No. 2 position on the Forbes list with $113 million is producer Jerry Bruckheimer. He is behind the "Pirates of the Caribbean" franchise and had a hit with the latest movie in the series, which came out this year and earned over $1 billion at global box offices.

Steven Spielberg ranks at No. 3 with $107 million, Forbes said. The last film directed by Spielberg was released in 2008, but he has kept himself busy on a number of projects since then where he was the producer or executive producer, including action flicks "Transformers: Dark of the Moon" and "Cowboys & Aliens" and the upcoming science fiction TV show "Terra Nova."

"Rocket Man" singer Elton John, whose most recent tour grossed over $200 million, takes the No. 4 spot on the list with $100 million in earnings, Forbes said.

TV personality and music executive Simon Cowell, whose "The X Factor" singing contest is about to make its U.S. debut, ranked No. 5 with $90 million, Forbes said.

Writer James Patterson, author of "The Women's Murder Club" series of novels and such titles as "I, Alex Cross," ranks at No. 6 on the Forbes list with $84 million.

Rounding out the top 10 on the entertainment world list are: Phil McGraw, the TV psychologist and Oprah Winfrey protege from the show "Dr. Phil," with earnings of $80 million; actor Leonardo DiCaprio with $77 million; radio shock jock Howard Stern with $76 million; and pro golfer Tiger Woods with $75 million.

DiCaprio and Perry were the only actors on the list, and Forbes.com noted that Perry earned most of his money from producing and directing projects instead of appearing on-camera.