Istanbul’s wide range of colors in the USA 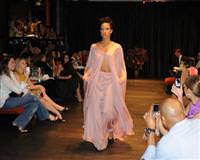 The United Nations' Permanent Representative for Turkey Ambassador Ertuğrul Apakan's wife Lale Apakan, New York Consul General Mehmet Samsar and his wife Feruze Samsar were amongst the crowd which included Turks and Americans that came out to watch the runway show.

The runway show was held at Slate, one of New York's most famous night clubs. Answering questions from the press following the show, Mehmet Köymen states, "I created a collection based on the wide range of colors that was visible in Istanbul's past when looking at the seven hills of the city."