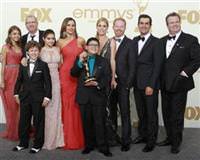 "Mad Men" and "Modern Family" won television's top drama and comedy prizes again on Sunday but elsewhere it was out with the old and in with the new at the Primetime Emmy Awards.

On a night of surprises that brought a slew of newcomers to the Emmy podium, "Mad Men" won best drama series for a fourth straight year but the waiting got tense as the 1960s advertising drama lost out in all the acting, writing and directing races.

"I did not think that was going to happen," creator Matthew Weiner said, accepting the best drama series trophy. "Mad Men" went home with just two Emmys -- including one from last week's creative arts ceremony -- even though it came into the awards show with 19 nominations.

"We were shut out, but then we also won this (best drama) award so it balances out. To me this is the prize that says people love what we are doing," Weiner said backstage.

The story was different for "Modern Family." Along with its best comedy win, the ABC mockumentary about three assorted couples and their children brought first-time wins for Julie Bowen and her screen husband Ty Burrell in the supporting acting slots, and Emmys for directing and writing.

Creator Steve Levitan called the wins "an embarrassment of riches" while actor Ed O'Neill said "it was better than the first time. To repeat is difficult. I am relieved."

Oscar-winning actress Kate Winslet won her first Emmy for her lead role in the HBO miniseries "Mildred Pierce." But the British period show "Downton Abbey," shown on PBS, was the miniseries winner, giving it a total of six Emmys overall.

"I didn't think we were going to win anything!" Winslet said.

Elsewhere, a host of new faces took home Emmys in a night that defied most predictions.

Melissa McCarthy won lead comedy actress at her first shot for the CBS romantic comedy "Mike & Molly," in which she plays an overweight teacher.

Emmy rookie Peter Dinklage won for his turn as the clever but rude Tyrion in HBO's popular medieval fantasy series "Game of Thrones," while Margo Martindale was an emotional first-time winner for her supporting actress role in FX drama "Justified," which came to the veteran actress after more than 20 years in the business.

Julianna Margulies, star of "The Good Wife" on CBS, won the race for best dramatic actress. Jim Parsons was a rare repeat winner for comedy "The Big Bang Theory" in a category that most pundits had thought would finally go to departing "The Office" star Steve Carell.

"I am really flabbergasted. I am more shocked this year," Parsons told reporters backstage.

Jaw-dropping moments were not only reserved for the winners.

Fox musical comedy "Glee" -- one of the most talked about shows of the last two years -- won just two Emmys, both in creative arts categories, while HBO's lavish "Boardwalk Empire" won seven of its eight total Emmys in last week's technical awards section. Its only win on Sunday night went to director Martin Scorsese.

HBO was the biggest network winner with 19 Emmys, followed by 14 for PBS, 11 for CBS, nine for Fox, eight for ABC and six for NBC.

Among the show's highlights was a smiling and apparently sincere Charlie Sheen, on the comeback trail after months of erratic behavior that resulted in his firing from CBS hit "Two and A Half Men." He was a last minute addition as a presenter.

"From the bottom of my heart, I wish you nothing but the best for this upcoming season," Sheen said of his former program that previously this year he had sharply criticized.

"American Idol" -- the most-watched show on U.S. television for the past seven years -- was left empty-handed again in the reality competition show race, which was won by long-running Emmy favorite "The Amazing Race."