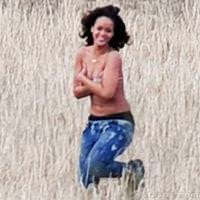 Global pop star Rihanna was thrown out of a corn field by an angry farmer in Northern Ireland after he spotted her posing for cameras in a skimpy top.

The Grammy Award winning singer, whose hit singles include "Rude Boy" and "S&M," was using the backdrop of the field near the town of Bangor for a video shoot on Monday ahead of three concerts in Belfast this week.

Crowds of local men and schoolgirls gathered at the side of the field when the singer and her entourage rolled up and she stripped down to a bandana bikini and torn blue jeans.

"I felt the thing was inappropriate and I requested that the filming end at that stage."

Mr Graham admitted he had no idea who the 23-year-old singer was when he got a call last week asking to use his field for a pop video. After filming stopped, he spoke briefly to the star who he said was understanding.

"She was most gracious and we shook hands and we parted on good enough terms," he said.