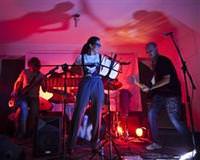 Afghans are used to having their days broken by a burst of gunfire or the boom of an explosion. But the barrage of drumming, bass beats and amped-up guitar solos that will hit the city next week may stop many in their tracks.

Sound Central, a one-day "stealth festival" that organizers hope will draw 1,000 to 2,000 young Afghans, will be the first music festival the country has seen since it plunged into three decades of violence in the late 1970s.

Afghan bands playing music from doom death metal to blues rock will be joined by musicians who have flown in from across Central Asia -- Iran to Uzbekistan and Kazakhstan.

The music will almost certainly be a new experience for most of the audience in a country where people seeking a change from traditional Afghan music tend to listen to western pop or sound-tracks from India's big-hit Bollywood films.

"The real bottom-line aim of this festival is to ignite youth to be interested in modern music," said organizer Travis Beard, who dreamt up the festival four years ago, and has been working on it in earnest for the last two years.

"What we are trying to do is to expose them to new kinds of music so they can get into those styles of music, and also just start playing music. Hopefully we'll get some kids saying 'Hey this is really cool! Dad can I get a drum set?' or 'Mum can I get a guitar'," Beard said.

Beard is an Australian who first came to Afghanistan as a news photographer five years ago, joined a band in Kabul and rediscovered his love of music "after many years away."

As he started to meet Afghan musicians, he got involved in supporting them -- with instruments or a place to practice -- and the festival was inspired by the community they formed.

With that in mind, he organized not only the day-long festival, but a week of workshops for Afghan musicians, and underground pre-festival concerts for all the bands at the festival to play more experimental music to a committed crowd.

They are also holding onto the amplifiers, graphic equalizers, drum kits and guitars that have been flown into Afghanistan for Sound Central, aiming to turn the festival into a yearly event and make it easier for kids who are interested in rock to start playing the rest of the year.

"I live in Herat, which is an old city and the people are too traditional," said Masoud Hasan Zada, a full-time journalist and part-time lead singer of blues-rock band Morcha, or "The Ants."

"There is too much tradition, including traditional music. Its too hard to talk about modern music, especially blues ... it's horrible sometimes," he told Reuters.

He spent a week in Kabul at the workshops, learning everything from online marketing to stage presence -- something Beard says is particularly hard for musicians who are talented but grew up in a culture that frowns on exhibitionism.

"We are going to teach them how to actually rock out!" Beard said with a grin at the start of the workshop, where more experienced performers thrashed on air guitars and jumped around a tiny stage, under the quizzical gaze of the students.

In a country where music was banned for years under the austere Taliban regime, music stores are attacked in some cities, and some of the Afghan musicians playing have had to shut down their websites or even cut their hair because of social pressure, the festival is a daring venture.

Security concerns means publicity has been mostly word of mouth, and the date has been kept deliberately vague. Messages revealing the time and venue will go out to music fans only on the morning of the event.

"Its been termed the first ever stealth festival in the world. So like a stealth bomber ... we are coming in under the radar, dropping a lot of music on the kids, and then flying out. The promotional side of it is very very small," Beard said.

He has also recruited international support for the festival, hoping to show the world a different side of the country he has made his home.

"Much as they see in the news that there is a lot of troubles here, a lot of the youth here just want to have some fun, just want to express themselves through the arts, whether it be music or any other type of arts," he said.

The crowds may still be relatively small, but at the underground concerts leading up to the festival, there were already a few die-hard fans.

"I really want to hear you scream," shouted Sabina Ablyaskina, lead singer of Uzbek funk band Tears of the Sun, in the tiny concrete bunker where the bands are warming up in front of a core of devoted fans for the main festival.

The crowd was a mix of hip young Afghans, one in a pair of Kanye West glasses, and a few expats. They roared back at her, and then started dancing, hard, to the music.

"Its one of the most unforgettable nights."

At 11:15 pm, the next band were just starting to get into their stride when the power cut off. At first organizers thought it was one of Kabul's regular electricity shortages, but then discovered that the landlord and his family -- trying to sleep upstairs -- weren't quite as taken by rock and roll.

But Afghanistan is muddling along toward a new music future. That night, an impromptu acoustic concert by torchlight kept the crowd dancing for half an hour.

And the landlord eventually agreed to leave the power on for the rest of the week -- if the concerts ended early.

So Afghanistan's first underground concerts now start at 8:00 pm, and are over by 10:30 pm, and there's no bar or alcohol allowed, in deference to the laws of the Islamic Republic. But the crowd don't seem to need anything more than the music.