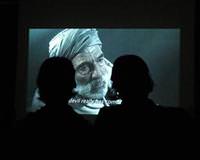 - A father desperately searches for his son, who has been sent on a suicide bomb mission. After losing everything, he ends up homeless and insane on the dusty streets of Kabul.

Tragedy can seem all too common in war-torn Afghanistan, but fortunately, this time, the story of Yacoub is not true.

Instead it is the center of a movie, one of 50 screened during the first Autumn Human Rights Film Festival. The event provides a central Asian stage for directors from Afghanistan and abroad who are tackling human rights issues, and a window for the public to explore challenges many have faced themselves.

"This film festival is special compared to other festivals I have attended, because it's about human rights," said Homayun Morowat, the Kabul-born director of the film about Yacoub, An Apple from Paradise.

The festival takes place at the tenth anniversary of the start of the U.S. military campaign in Afghanistan, a time when the human rights achievements and abuses of the last decade are in sharp focus.

Amnesty International said on Wednesday the Afghan government and its international supporters have failed to keep many of the human rights promises they made to the Afghan people.

But media freedoms are still better than in almost all the surrounding countries, according to the Press Freedom Index compiled by Reporters Without Borders, making the Afghan capital a logical choice to host a central Asian film festival.

Organizers say the festival has been years in the planning and the dates chosen were practical, not political.

"This event is not related to any political issues, and we started to plan it three years ago," said Malek Shaf'ii, the chief executive of Afghanistan Cinema Club.

Instead he said they fixed on the human rights theme because over 90 percent of movies and documentaries made by Afghan independent film makers touch on human rights problems.

"Human rights issues are one of the biggest challenges for Afghanistan," Shaf'ii told Reuters in the heavily-guarded French Cultural Institute in central Kabul, where many films were shown.

Afghanistan struggles with desperate poverty and three decades of war that has killed thousands of civilians and maimed or traumatized tens of thousands more. There are also strict restrictions on women, who traditionally have limited rights.

"The first step we can take to improve human rights is just let the people know the problems and challenges, and we are doing this to make a connection between film makers and the public audience," Hassan Zakizadeh, a festival spokesman said.

The film festival, which includes 32 Afghan movies and 18 from other countries, lasts seven days, with screenings in a downtown cinema and a auditorium at the French Cultural Center.

For Morowat, who now lives outside Afghanistan, the making of his film -- which features a despairing father, an innocent son, a corrupt police system and a holy site occupied by gamblers -- helped lift his sadness at the fate of his homeland.

"Now I am relaxed as the experiences are transferred to my audience," he told Reuters after the show.