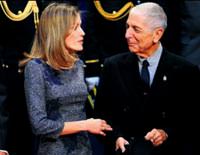 Renowned Canadian singer-songwriter and poet Leonard Cohen said Wednesday he had recorded his first new album since 2004 and would release it next year.

Cohen told journalists in the northern Spanish town of Oviedo, where he had travelled to collect Spain's top award for authors who do not write in Spanish, that "Old Ideas" consisted of ten previously unpublished tracks.

"I've played it for a few people, and they seem to like it," the 77-year-old said in his trademark gravelly voice.

"God willing," Cohen said when asked if he planned to go on tour again. "I never quite know whether there's going to be a tour or not."

The writer and singer of "Suzanne," "Hallelujah," "Chelsea Hotel No. 2" and other hits apologized for cancelling a concert in Valencia in 2009 after he fainted, and said he would be delighted to appear in the eastern city again.

The Montreal native also spoke of his deep admiration for Spanish culture and said he had named his daughter Lorca, after Federico Garcia Lorca, Spain's most famous 20th century poet, who was summarily shot by supporters of a military uprising in 1936 which started the Spanish Civil War.

Cohen first read Lorca when he was a teen-ager.

"He was the first poet that invited me to live in his world," Cohen said.

"You know, when you're writing, you're always an absolute beginner. Each time you take up your guitar or sit by a blank page, you start from scratch. It's a struggle."

The Asturias Foundation awards eight prizes every year for fields ranging from science to the arts. Winners get 50,000 euros ($69,000) and a statue by Catalan artist Joan Miro.