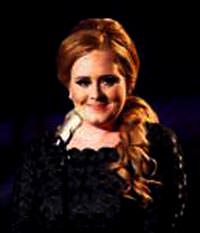 The Grammy-winning singer, who was forced by throat problems to cancel tour dates through the end of the year, had surgery in Boston to treat a benign polyp on her vocal cords which was causing recurrent bleeding, Massachusetts General Hospital said in a statement.

The condition "is typically the result of unstable blood vessels in the vocal cord that can rupture," the hospital said in a statement on Monday, adding that doctors expect the singer "to make a full recovery from her laser microsurgery."

The hospital did not say when Adele had the surgery.

Last week the singer dismissed rampant speculation in the media that she has throat cancer.

"We would like to reiterate that Adele is to undergo surgery for a hemorrhaged vocal cord. All reports regarding any other condition are 100 percent false," her spokesman said in a statement.

The surgery was performed by Dr. Steven Zeitels, who the hospital said has pioneered many vocal cord surgical procedures, including the use of specialized lasers to stop vocal cord bleeding in singers.

Earlier this month Adele pulled out of 10 U.S. dates on the back of her hit album "21" that has produced hits such as "Rolling in the Deep" and "Someone Like You." "21" is the best-selling album of the year in the United States.

Last month she topped the American Music Awards nominations, edging out the likes of Katy Perry and Lady Gaga with four nods.