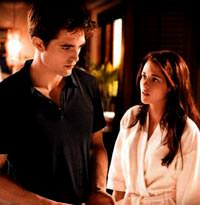 The new "Twilight" vampire movie opened with a massive $283.5 million in worldwide ticket sales over the weekend as passionate fans filled theaters for the beginning of a two-part finale for the hugely popular supernatural love story.

"The Twilight Saga: Breaking Dawn: Part 1" captured an estimated $139.5 million in the United States and Canada, distributor Summit Entertainment said on Sunday. That ranked as the fifth biggest domestic opening of all time.

The movie's performance beat studio forecasts for the film, which shows young lovestruck human Bella wedding vampire Edward and becoming pregnant. Summit had predicted as much as $125 million domestically while other box-office analysts had estimated $140 million.

Internationally, "Breaking Dawn" added $144 million in 54 countries over the weekend.

The movie cost about $110 million to make.

The domestic opening ranked as the year's second-highest, behind only the "Harry Potter" finale over the summer. "Harry Potter and the Deathly Hallows - Part 2" pulled in a record $169 million during its debut weekend in July.

But "Breaking Dawn," the fourth movie in the series, failed to top the previous domestic opening-weekend record for a "Twilight" film. "New Moon" debuted to $142.8 million in 2009.

Eighty percent of the film's audience was female, the core fan base for the story based on novels from Stephanie Meyer. Diehard fans of the books have embraced the screen adaptations including the latest movie, said Richie Fay, Summit's president of domestic distribution.

"We delivered to the audience ... exactly what they wanted to see," Fay said. He said the movie's success "bodes well for Breaking Dawn - Part 2," which hits theaters in 2012.

"Breaking Dawn" brought in an average of $34,351 at more than 4,000 screens in North America (U.S. and Canada) from midnight showings early on Friday through Sunday.

The "Twilight" series is one of Hollywood's most lucrative franchises. To date, the franchise has rung up more than $2 billion from box offices worldwide, according to Hollywood.com Box Office.