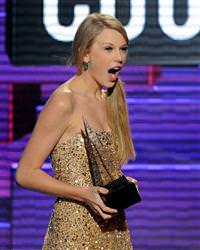 Country sensation Taylor Swift came up the big winner at the American Music Awards on Sunday, claiming three trophies including the top honor, artist of the year.

But Adele, who came into the awards show as the most-nominated singer with four nods, lost artist of the year to Swift, who seemed genuinely surprised by the upset victory.

"This is one of the craziest things that has ever happened to me," Swift said. "I have no idea what I'm supposed to say. I did not think this was going to happen."

Along with year's top artist, Swift claimed AMA trophies for favorite female country artist for the second straight year, and she nabbed best country album with her "Speak Now."

Adele, who is recovering from vocal cord surgery, was not on hand to accept her awards.

Rapper Nicki Minaj was the night's other big winner with two AMAs in the rap or hip-hop category: favorite artist and best album for her "Pink Friday."

Minaj opened the show singing her smash hit single "Super Bass" in a metallic outfit that had two large speakers on her bottom, and after winning best hip-hop album for "Pink Friday" was overcome with emotion.

"This one could actually make me cry," Minaj said onstage before wiping away tears. "I can't believe this is happening."

MANY AWARDS, MANY WINNERS

Elsewhere, the AMA awards were split among numerous acts.

Rounding out the country awards with Swift were Blake Shelton for best male artist and Lady Antebellum best group.

Maroon 5 picked up the honor for best pop or rock group behind current hit "Moves Like Jagger," and Bruno Mars rounded out the pop category with an AMA trophy for best male artist.

While awards are the major focus, the show brings out top acts to perform. Lopez put on two crowd-pleasing acts, one solo and the other with Black Eyed Peas frontman will.i.am.

Justin Bieber with his holiday song "Under the Mistletoe," had fans singing in the audience, and Enrique Iglesias with his anthem "I Like How it Feels" had them hopping to the beat.

Marc Anthony and Pitbull also rocked the crowd, and the show ended with LMFAO singing from their "Party Rock" album, dancing with Bieber, and stripping to their underwear.

The AMA awards is among the most widely watched of the annual U.S. musical honors at the end of each year. Next up on the list of key honors are Grammy nominations, which will be announced on November 30.