Jackson doctor gets 4 years in jail 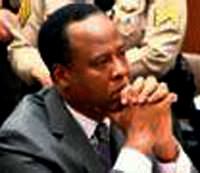 Michael Jackson's personal physician, Dr. Conrad Murray, on Tuesday was sentenced to four years in jail without probation for involuntary manslaughter in the pop star's death.

Los Angeles Superior Court Judge Michael Pastor gave Murray the maximum sentence and said the physician engaged in "money for medicine madness that is simply not acceptable to me."

Murray, 58, dressed in a gray suit with purple paisley tie, sat emotionless through the sentencing. Just before being led out from the courtroom, he blew a kiss to an unidentified woman who shouted "we love you" to the convicted killer.

Outside the courtroom, Jackson's mother Katherine, who daily attended Murray's trial that started in late September and ended on November 7, said "the judge was fair."

"Four years is not enough for someone's life. It won't bring him (Jackson) back, but at least he (Murray) got the maximum" sentence, Katherine Jackson told reporters.

While Murray was sentenced to four years in jail, he will likely spend far less time behind bars due to the nonviolent nature of his crime and overcrowding in California's penal system, officials and experts said.

Murray's attorney's have 60 days to appeal the sentence.

"Thriller" singer Jackson, who rose to fame in the late 1960s and '70s as a member of the Jackson Five and had a stellar solo career in the 1980s, died of a drug overdose in June 2009, principally from the use of the surgical anesthetic propofol as a sleep aid. That drug had been obtained and administered to Jackson by Murray at the singer's rented home.

A jury convicted Murray of involuntary manslaughter, or gross negligence, after witnesses testified propofol should not be administered at home and, if it is, must be given only with the proper life-monitoring equipment on hand. It was not.

Prosecutors painted a picture of Murray trying to cover-up evidence of propofol and lying to doctors about its use.

Murray's defense claimed Jackson might have administered a fatal dose of the drug to himself, but the jury did not agree.

NO LENIENCY FOR MURRAY

Key to the sentencing were several factors including money -- Dr. Murray had negotiated a $150,000 per month salary to care for Jackson ahead of a series of concerts in London -- and a TV documentary made during the trial, but aired after it was over, in which Murray denied any feelings of guilt.

"Not only isn't there any remorse, there's umbrage and outrage on the part of Dr. Murray against the decedent," Judge Pastor said, in noting the documentary.

The sentencing was attended by several members of the Jackson family including Katherine, sisters La Toya and Rebbie, and brothers Jermaine and Randy.

Deputy District Attorney David Walgren argued that Murray should not be given leniency. He said the doctor was negligent from the moment he began to care for Jackson, and after finding Jackson lifeless in his bed on June 25, 2009, Murray failed to quickly call paramedics, hid evidence of propofol and lied about its use to emergency room doctors.

Defense attorney Ed Chernoff sought leniency, saying the crime was Murray's first and he had a long history of quality treatment to patients. He asked the judge to look at Murray's "book of life" and not just the one chapter regarding Jackson.

He also said Murray will also suffer from the infamy of his conviction for the death of a man who was so famous and beloved by so many people. "Whether he is a barista. Whether he's a greeter at Wal-Mart, he's really going to be the man who killed Michael Jackson," Chernoff said.

But Judge Pastor said Murray engaged in a "pattern of lies" he characterized as a "disgrace to the medical profession."

In a news conference after the sentencing, defense attorney J. Michael Flanagan said he believed Pastor was "openly hostile" to Murray during the trial and sentencing.

Legal experts and a spokesman for the Los Angeles County Sheriff, which runs the jail system, said non-violent offenders in California generally serve only half their full sentence behind bars. Due to overcrowding the sheriff can, at his discretion, shorten the sentence even further.

"Murray could maybe serve a couple of months, and then the sheriff may choose to place him under house arrest or fit him with an ankle monitoring bracelet. But he will have to serve time," said Mark McBride, a Beverly Hills-based defense attorney who was not involved in the Jackson doctor's trial.

In addition, Murray was ordered to pay some court fees, and another hearing was set for prosecution claims that he may owe more than $100 million in restitution to Jackson's family.