Magicians of the year in Istanbul 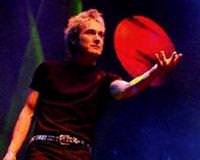 The winners of the International Magicians of the Year Award, the Spencers: Theater of Illusion performs in Istanbul from December 9th to the 11th at the TİM Show Center...

Kevin and Cindy Spencer, who have redefined the art of illusion through combining modern illusion techniques with original theatrical elements, will be performing a three-day tour in Istanbul.
One of the most sought after illusion teams, the duo have been named 'Performing Arts Entertainers of the Year' for six years in a row. The Spencers are one of the biggest illusionist teams to tour in the United States, and spend 40 weeks a year on tour with tons of props in order to perform their latest technology tricks and special effects. The magical duo work with leading inventors, designers and masters of the sector in order to display never-before-seen illusion tricks.
AWARDED FOR 'CONTRIBUTIONS TO HUMANITY'
During their show, the duo use the power of thought to lift people in the air, to pass through walls, to disappear and reappear. In one of their numbers, an audience member is asked to participate in an amazing mind-reading demonstration. The Spencers, who believe that the power of magic goes beyond the stage, have also designed a program entitled the 'Healing of Magic' for health personnel that work in the area of rehabilitation. This project, which contributes to treatment through advancing patients' motor skills and cognitive skills, has been awarded the "Harry Chapin Award for Contributors to Humanity. The Spencers: Theater of Illusion plays at the Maslak TİM Show from December 9th to the 11th.