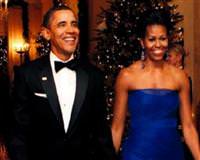 The annual awards program, which also honored singer Barbara Cook, jazz great Sonny Rollins, and cellist Yo-Yo Ma, brought together stars from the stage and screen in a celebration of music, movies, and Broadway shows.

"Right now, somewhere in America, there is a future Kennedy Center honoree - practicing on some phone books, or writing songs to impress a girl, or wondering if she can cut it on the big stage," Obama said at the White House, greeting the winners before the show and noting the importance of the arts.

It turns out the president once fell for Streep, the actress who has been nominated for 16 Academy Awards and won two.

"Anybody who saw 'The French Lieutenant's Woman' had a crush on her," Obama said, joking that he was straying from his prepared remarks.

Of Diamond, Obama said his songs could be heard everywhere from baseball games to children's movies.

"With a voice he describes as being full of gravel, potholes, left turns and right turns, he went on to sell more than 125 million records," Obama said.

The "Sweet Caroline" singer told reporters he would thank Caroline Kennedy, the daughter of slain President John F. Kennedy, for being the namesake of that signature song.

"I'm going to thank her for giving me the title for 'Sweet Caroline,'" Diamond said before the show. "The story really is about my former wife and myself, but it is her name that I used, and I have to thank her for that."

Kennedy, who presided over the evening, referred to Diamond with a line from the tune -- "reaching out, touching me" -- to laughter from the audience. She later joined singer Smokey Robinson and other performers for a rendition of the song, crooning along somewhat awkwardly.

In other crowd-pleasing moments, comedian Stephen Colbert gave a humorous introduction to the music of Ma, who first played for a U.S. president at the age of 7.

"Yo-Yo doesn't just play the cello. He rocks it. He shreds it. He cranks it up and he rips off the knob - metaphorically, of course, because the knobs on a Stradivarius are like a half a million dollars a piece," he said.

Obama said he could learn a thing or two from the cellist.

"Maybe the most amazing thing about Yo-Yo Ma is that everybody likes him," Obama said at the White House, drawing laughter. "You've got to give me some tips."

"America is the home of jazz, it's where we started jazz, and people love jazz all over the world," he told reporters.

Actresses Glenn Close and Patti LuPone joined a lineup of top stage stars that sang a series of songs honoring Cook, who achieved fame with roles in "Candide" and "The Music Man" on Broadway decades ago.

"Thank you, Barbara for all the music - the joys, the longing, the sadness and humor with which you infuse each song," said actor Matthew Broderick who, along with wife Sarah Jessica Parker, addressed the audience about Cook.