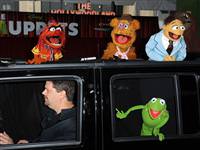 If I didn't know better I'd say that Disney slipped someone over at Fox Business Channel something to go on a rant against its hit movie, "The Muppets."

On Fox Business Channel, anchor Eric Bolling showed a clip of the new Disney movie and suggested -- well, no, he said outright -- that the story was aimed at planting the seeds of class warfare among our precious children.

That's because the Muppet-villain is an oil baron called Tex Richman.

"What's actually going on there? Is liberal Hollywood using class warfare to brainwash our kids?" he asked, quite reasonably.

Well, of course it is.

The rest of America must love the oil industry, and has a warm and fuzzy feeling for corporate America. That must be why that Occupy Wall Street thing hasn't gone anywhere.

We'll roll the tape. You decide.

And by the way, Disney did not respond to requests for comment.