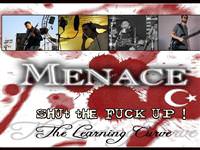 With their album ‘The Learning Curve’ set for release in January of 2012, the group’s first live performance takes place tonight at 9:30 p.m. at Istanbul Live Taksim.

With Martin Nadin, a British national, as the band's front man, the group's remaining members Tutku Demir on guitar, Arda Uyar on drums and Cem Catik on bass guitar are Turks!
In addition to being the group's vocalist, Martin is also an avid composer and songwriter and has been sharing videos of his work on facebook and youtube, where his songs have acquired significant popularity.
Menace blends a mixture of American indie rock, grunge and post-punk musical stylings, and claims they are most influenced by the likes of Pearl Jam, Supergrass, Radiohead and Perfect Circle.