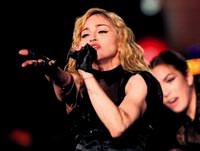 Spanish police arrested a 31-year-old man Wednesday and charged him with illegally leaking an early recording of a new Madonna song on the internet.

At least one demo recording of "Give Me All Your Love" was posted on the web in November, two months before the planned release of Madonna's first new album since 2008's "Hard Candy."

Police did not give the name of the man arrested in the city of Zaragoza in northern Spain, but said his initials were J.M.R. and that he was a big Madonna fan. He was charged and released, a police statement said.

The "Madonnaleaks" investigation began after lawyers for the singer -- who said in November that she was very upset over the leak -- traced the posting to Spain. Police said they found recordings of the song in a search of the suspect's belongings.

Intellectual property watchdgos have targeted Spain as one of the world's largest copyright violators. The Socialist government, which left office this week, prepared a bill aimed at shutting down file-sharing web sites providing copyrighted material. But the law was never sent to Parliament.