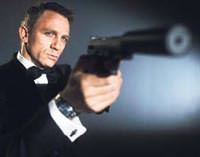 It turns out that after shooting in Istanbul, Adana will also be used as a location for filming a series of shots for the 23rd James Bond film, entitled Skyfall.

After the announcement that the opening scene for Skyfall will be set in Istanbul, it has now been revealed that another scene will be filmed on Adana's historic Varda Railroad Bridge. The shots in Adana will include leading actor Daniel Craig.
Adana Metropolitan Municipal Mayor Büyükşehir Vekili Zihni Aldırmaz states, "The production team has expressed that they will begin shooting in February and March. We will provide all of the support necessary for the 200-member crew, who will be staying for three months."