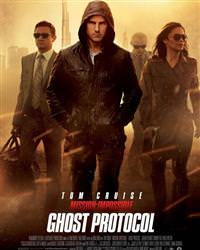 "Mission: Impossible - Ghost Protocol" cruised to No. 1 at box offices on Sunday, even as major new movies opened on Christmas Day which may change top 10 results when final numbers are tallied.

The new Tom Cruise movie rang up an estimated $26.5 million in U.S. and Canadian ticket sales over the three-day weekend, according to studio estimates, after expanding from a limited release in Imax and other large-screen theaters last week.

Paramount Pictures, which released the movie, said it expects a four-day tally of slightly more than $40 million by Monday, when final estimates are reported. The film's cumulative ticket sales are expected to reach just over $72 after Monday.

Indeed, the weekend box office race truly will finish on Monday because Christmas day annually is among the most crowded days in theaters and on Sunday, director Steven Spielberg's widely-anticipated "War Horse" makes its debut along with another newcomer, thriller "The Darkest Hour."

Hollywood's major studios loaded the release schedule last week heading into the holiday, expecting the films to play well between now and New Year's Eve while parents and kids are away from work and school. As a result, a clear picture of how the movie studios fared this Christmas season awaits the full week of box office reports.

Meanwhile, over the weekend Warner Bros' "Sherlock Holmes: A Game of Shadows" took the No. 2 spot on U.S. and Canadian (domestic) box office charts with $17.8 million, according to Sunday's estimates. Cumulative ticket sales for "Sherlock" after two weeks now stand at roughly $76.5 million.

Another holdover from last week, family comedy "Alvin and the Chipmunks: Chipwrecked" squeaked into No. 3 with $13.3 million, pushing its total domestic ticket sales to $50.3 million after two weeks in theaters.

Following it were a trio of last week's newcomers, widely-anticipated "The Girl With the Dragon Tattoo," family film "The Adventures of Tintin" and comedy "We Bought A Zoo."

"Dragon Tattoo" landed at No. 4 on Sunday with $13 million, a hair behind the chipmunks, and a Sony spokesman cautioned the studio's figure could change when Sunday's figures are final.

"Today and tomorrow should be our strongest days of the holiday frame," the spokesman said, noting that the studio did not have a Monday estimate.

"Tintin," another Spielberg film released by Paramount, landed at No. 5 over the weekend with $9.1 million. The studio sees it rising to $14.3 million after Monday. Total ticket sales by Monday are seen at $22.3 million since its debut.

Finally, another new entry this weekend, the comedy "We Bought a Zoo," landed at No. 6 with $7.8 million.

Paramount Pictures is a unit of Viacom Inc. Warner Bros. is part of Time Warner Inc.. "The Girl With the Dragon Tattoo" was released by the movie studio division of Sony Pictures Entertainment, a unit of Sony Corp. "Chipwrecked" and "Zoo" were both released by film divisions of 20th Century Fox, a unit of News Corp..