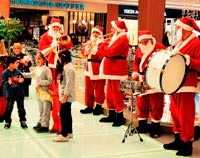 This year, a variety of the city’s shopping centers will be hosting a series of events to usher in the New Year.

A Plus Ataköy
Santa Claus to entertain!
Santa Claus will be arriving to A Plus Ataköy with surprises and presents. After opening their doors to New Year's celebrations all month, little ones that visit the A Plus Ataköy Shopping Center on December 31st will have a great time with entertainment by Santa Claus, puppets and a dance show.
Carousel
An illusion show for the kids…
Kids who visit Bakırköy's Carousel Shopping Center on December 31st will be able to take photos with Santa. In addition, an illusion show and juggling display will be fun for the little ones. Also anyone who spends over 50 TL on shopping will have the chance to win a car.
Astoria
Win with a 'Luck' card
Esentepe's Astoria Shopping Center continues to distribute gifts with the 'Astoria Şans Kartı'. Anyone who spends 100 TL or more will win the chance to participate in the 'luck card' drawing. Gifts in the drawing include an LCD television, home appliances as thousands of other gifts awaiting their rightful owners. The last day to participate in the drawing is December 31st.
Akbatı
It's raining gifts…
On December 31st, the Orkestra Senkron will be performing at Esenyurt's Akbatı Shopping Center. In addition, the shopping center will be offering up 108 gifts in a special New Year's drawing. All visitors that spend over 50 TL on shopping will be eligible to participate in the drawing.
Perlavista
Surprises await you
Those who visit the Perlavista Shopping Center between now and December 31st, will be able to take photos with Santa Claus and Mrs. Claus. Also, both Santa and Mrs. Claus will be distributing surprise gifts.
Akmerkez
Hours of fun with Latin sounds and Selen Servi...
Etiler's Akmerkez will be ushering in the New Year with Latin music. Tonight Selen Servi and Ömer Önder will perform as will the Latin Band. In addition, on December 31st, the Akmerkez will be hosting a cookie cooking class for the little ones.