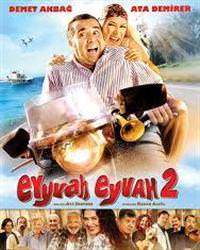 According to information provided by Screen Writers Guild (SİYAD) Administrative Board Member and Antrakt Sinema Newspaper General Manager Deniz Yavuz, out of the 42,298,500 tickets sold, 50.2 percent were for Turkish films.
In 2011, a total of 291 movies were released in theaters in Turkey. While out of the total films released, 75 were domestic films, they still accounted for 49.9 percent of revenue from tickets. In 2010, 66 domestic films were released, while back 2001, there were just 29 Turkish films that showed.
The highest viewed film in 2011 was ''Eyvah Eyvah 2'', with 3,947,988 tickets purchased. ''Aşk Tesadüfleri Sever'' (Love Likes Coincidences) followed in second with 2,418,090 viewers. Coming in third was ''Kurtlar Vadisi: Filistin'' (Valley of the Wolves: Palestine) with 2,418,090 tickets sold.
The companies who distributed the highest number of films to theaters were UIP Türkiye, Özen Film, Warner Bros and Tiglon.

When taking into consideration both numbers of films released as well as proceeds, although Turkey's film industry is greatly on the rise and the sector's growth potential continues to increase, upon the acknowledgement of ticket sales per person, it is evident the nation falls behind the United States and Europe in this category. While in Europe and the United States the number of tickets sold per person annually ranges between three to four, in Turkey just one ticket is sold for every two people.