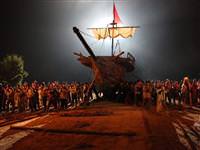 A second trailer has been released for the highly anticipated film Fetih 1453 (Conquest 1453) which depicts Fatih Sultan Mehmet's conquest of Istanbul.

With the highest film budget ever allocated to a domestic film, Fetih 1453 stars Devrim Evin as Fatih Sultan Mehmet, İbrahim Çelikkol plays Ulubatlı Hasan while the role of Urban's daughter Era is played by Dilek. After almost three years of shooting, Fetih 1453 is set for release on February 17th.

The film starts with a famous quote from the Prophet Muhammad, "Verily you shall conquer Constantinople. What a wonderful leader will he be, and what a wonderful army will that army be!"Fetih 1453 tells the story of the Conquest of Istanbul during the 1451-1453 years of Fatih Sultan Mehmet's reign.