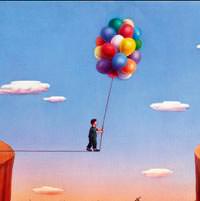 An exhibit of the work’s of artist Gürbüz Doğan Ekşioğlu, one of Turkey’s most significant illustrators, entitled ‘An Excursion on Paper’ (Kâğıt Üzerinde Gezinti) will run until February 25th Füsun Inan Art Gallery in Teşvikiye.

The exhibit contains over 30 pieces by the famous artist, whose caricatures and graphic designs have earned him a total of 71 awards both international and from Turkey and his works have been exhibited in 15 different countries.

Gürbüz Doğan Ekşioğlu continues to teach at the Yeditepe University Fine Arts Department and works from Istanbul. Don't miss the chance to see a collection of his original works in person! Tel: 0212 232 40 49